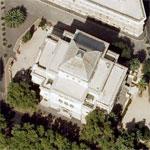 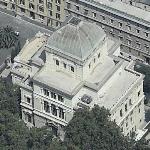 The building was constructed shortly after the unification of Italy in 1870, when the Kingdom of Italy captured Rome from the Napoleonic regime, which backed the Papal States. Victor Emmanuel II dismantled the Roman Ghetto and granted the Jews citizenship. The building which had previously housed the ghetto synagogue (a complicated structure housing five scolas in a single building) was demolished, and the Jewish community began making plans for a new and impressive building.
Links: en.wikipedia.org
1,276 views