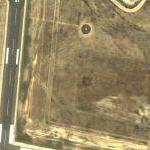 By kjfitz @ 2010-04-29 16:22:03
@ -34.228835, 142.089593
Mildura, Australia (AU)
In 1960 was established on behalf the Department of Supply (DOS) the first Australian Balloon Launch Station (ABLS) which was located at the Mildura airport in Victoria. The main activity there was to support an atmospheric sampling program carried out by the United States Atomic Commission under a first intergovernment agreement which lasted almost seven years and that allowed the launch of near 600 balloons from the station. Once finished a new document was signed reducing sharply the amount of missions devoted to the sampling effort but at the same time diversifying the research aims of the flights to other branches of Science as well to other users.
Links: stratocat.com.ar
410 views