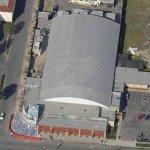 The rink itself was an innovation of itself, and it's design was patented in 1946. Instead of a grid of pipes under the surface (which caused ripples on the surface), a series of 1/2" thick tanks were the foundation.

Originally an outdoor rink, the southern California weather conditions proved too tough, so it was converted to an indoor facility. Over the years, many improvements have been made to keep it modernized. It is still owned by the Zamboni family.

Zamboni ice resurfacers are still built at the company's nearby headquarters, with over 8500 units sold.
Links: www.paramounticeland.net
740 views