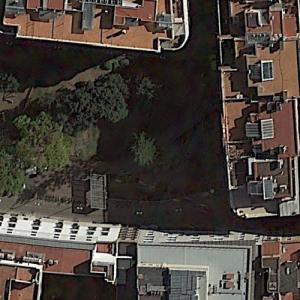 By Drudii @ 2017-09-06 15:01:59
@ 41.3843855, 2.1722205
Barcelona, Spain (ES)
The Plaza de la Vila Madrid Roman Necropolis is a small square located in the city of Barcelona in Spain. The site was laid out in the 1950s and sits on the site of a Roman necropolis from the Roman City of Barcino. A raised walkway was built and the original tombs can be seen from the elevated walkway and viewing points. The tombs were placed in lines along a secondary Roman road that branched off from one of the two main roads in Barcino. The tombs date back to the 1st - 3rd century AD and the people buried there were from the middle class and lower class members of Barcino. The cemetery was located outside the city walls as the Romans had a rule for burying their dead outside city walls.
Links: www.barcelonas.com
317 views