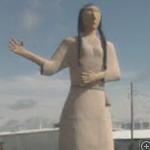 By kkeps @ 2011-11-12 16:00:44
@ 42.732626, -94.658573
Pocahontas, Iowa (IA), US
Pocahontas (c. 1595 – March 1617), later known as Rebecca Rolfe, was a Virginia Indian chief's daughter notable for having assisted colonial settlers at Jamestown. She converted to Christianity and married the English settler John Rolfe. After they traveled to London, she became famous in England in the last year of her life. She was a daughter of Wahunsunacawh, better known as Chief or Emperor Powhatan (to indicate his primacy), who headed a network of tributary tribal nations in the Tidewater region of Virginia (called Tenakomakah by the Powhatan). These tribes made up what is known as the Powhatan Chiefdom and spoke a language of the Algonquian.
Links: virtualglobetrotting.com
484 views