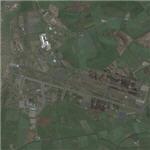 Its runway is 3,049 m (10,003 ft) long. The United States maintained a Navy SEAL commando unit, a 20 person team known as Naval Special Warfare Detachment 1 (The other overseas Naval Special Warfare Detachments, 2 and 3 were based at Roosevelt Roads, Puerto Rico, and Subic Bay, Philippines) at the base and the Royal Marines occasionally use the facility for training exercises. The civilian airport is located at the opposite end of the base from the hangars, bunkers and the SEAL building.

During the Cold War, Machrihanish was a strategically important North Atlantic Treaty Organization (NATO) airfield, with its location giving immediate access to patrol & support naval operation over the North Atlantic. It was also valuable as a stopping point for transatlantic military flights.

An answer to the House of Commons in 2004 reveals that the base was handed over by the United States Navy back to Ministry of Defence control on June 30, 1995.
Links: en.wikipedia.org
1,259 views