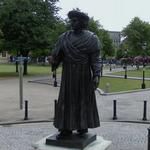 By adrbr @ 2011-11-13 09:08:25
@ 51.45177, -2.601888
Bristol, United Kingdom (GB)
Raja Ram Mohan Roy (Bengali: রাজা রামমোহন রায়) (22 May 1772 – 27 September 1833) was an Indian religious, social, and educational reformer who challenged traditional Hindu culture and indicated the lines of progress for Indian society under British rule. He is sometimes called the father of modern India. He founded, along with Dwarkanath Tagore and other Bengalis, of the Brahmo Sabha in 1828, which engendered the Brahmo Samaj, an influential Indian socio-religious reform movement during the Bengal Renaissance. His influence was apparent in the fields of politics, public administration, and education, as well as religion. He is known for his efforts to abolish the practice of sati, the Hindu funeral practice in which the widow immolated herself on her husband's funeral pyre.
Links: en.wikipedia.org
2,647 views