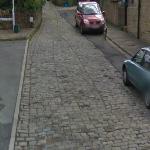 The tramway closed in 1934. It is estimated that the service had traveled over 4,582,000 miles and carried about 57.5 million passengers during the years it was active.

In this view you can clearly see the cobblestone road and the rail splits into two rails. The cobblestone road and rails follows a small section of this road and then goes along a cobble stoned track that only trams used that took them up to the location of Trawden terminus. The section that only the trams used has become a walk path, but the single rail is still in place.
Links: en.wikipedia.org
545 views