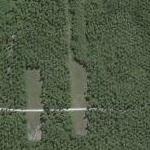 By kjfitz @ 2010-11-30 16:51:37
@ -12.155776, 96.825289
West Island, Cocos (Keeling) Islands (CC)
Late in the war, two airstrips were built, and three bomber squadrons were moved to the islands to conduct raids against Japanese targets in South East Asia and to provide support during the planned reinvasion of Malaya and reconquest of Singapore. The first aircraft to arrive were Supermarine Spitfire Mk VIIIs of No. 136 Squadron RAF. They included some Liberator bombers from No. 321 (Netherlands) Squadron RAF (members of exiled Dutch forces serving with the Royal Air Force), which were also stationed on the islands. When in July 1945 No. 99 and No. 356 RAF squadrons arrived on West Island, they brought with them a daily newspaper called Atoll which contained news of what was happening in the outside world. Run by airmen in their off-duty hours, it achieved fame when dropped by Liberator bombers on POW camps over the heads of the Japanese guards. In 1946 the administration of the islands reverted to Singapore.
Links: en.wikipedia.org
970 views