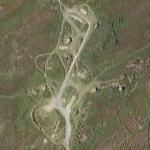 CH radar was developed in the late 1930s to provide advance warning of enemy bombers and was the first major operational radar system. By the start of the war nineteen stations covered the East Coast of Britain from Scotland to the Isle of Wight. By 1941 the chain had been extended to the West Coast with only remote north-west Scotland unprotected.

During the German occupation of France, German bombers were based in France. They attacked industrial targets in the Irish Sea area by flying around the South Coast in preference to the more direct, but dangerous, route across England. Manx radar stations played an important part in providing surveillance of the Irish Sea area.

CH proved its worth during the Battle of Britain when Germany sought to gain air supremacy in readiness for the planned invasion of Britain. CH allowed the small force of British fighter aircraft to be directed to the appropriate areas for intercepting enemy aircraft.

CH radar stations were positioned so as to provide a clear view over the sea. They used large static aerials, which were quite unlike a modern radar system, such as that in use today at Ronaldsway Airport, which sends out a narrow radio beam scanning the surrounding area. Women’s Auxiliary Air Force (WAAF) operators used electronic and electromechanical aids to calculate the distance, height and bearing of approaching aircraft. Friendly aircraft were fitted with special radio equipment known as IFF (Identification, Friend or Foe), which responded to the CH radar signals and allowed them to be identified on the radar display.

Construction of Cregneish CHL appears to have started in 1939, but the three CH sites on the Island were not operational fully operational until 1941. The technical buildings for CH were duplicated to allow work to continue during maintenance or equipment failure and were constructed from reinforced concrete with massive blast walls. The transmitter aerials were suspended between 325 ft high steel masts stabilised by steel guy ropes and the receiving aerials were mounted on 240 ft high wooden towers. The buildings for CHL were of much lighter construction and the equipment was more frequently updated. CH and CHL stations were both given a high security classification and were provided with barracks blocks and security guards.

The technical buildings on the Island’s CH stations have long since lost their camouflage netting together with much of their earth covering. They are now in retirement, often serving as over-engineered farm sheds or animal shelters. The buildings at Scarlett are visible from the Coastal Footpath, as are those at Dalby from the main road. All the CHL technical buildings at Meayll Hill have disappeared, but the concrete and brick foundations still remain.
Links: en.wikipedia.org
1,214 views