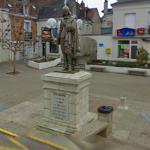 René Descartes (31 March 1596 – 11 February 1650) was a French philosopher and writer who spent most of his adult life in the Dutch Republic. He has been dubbed the 'Father of Modern Philosophy', and much subsequent Western philosophy is a response to his writings, which are studied closely to this day. In particular, his Meditations on First Philosophy continues to be a standard text at most university philosophy departments. Descartes' influence in mathematics is equally apparent; the Cartesian coordinate system — allowing algebraic equations to be expressed as geometric shapes, in a 2D coordinate system — was named after him. He is credited as the father of analytical geometry, the bridge between algebra and geometry, crucial to the discovery of infinitesimal calculus and analysis. Descartes was also one of the key figures in the Scientific Revolution.
Links: en.wikipedia.org
491 views