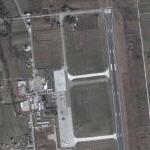 "It was constructed in 1961 and is extremely large. It was the home of two squadrons of F-6 interceptors tasked with the defence of the capital. It is currently the home base to 4020 Regt (previously 7594 Regt). Facilities here were upgraded by the USA to enable USAF C-17s to use it for relief supply flights during Operation Allied Force in April 1999. It was also home to the spectacularly inept 'Task Force Hawk' deployment of US Army AH-64As and UH-60s of the 12th Avn Brigade between April and June 1999. After 2000 it was home to a squadron of F-6s and the few remaining serviceable F-7As."
--www.aeroflight.co.uk
Links: www.aeroflight.co.uk, en.wikipedia.org
1,354 views