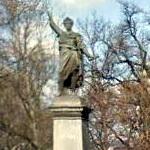 There hundreds of Petőfi statues and monuments throughout Hungary as well as in the neighbouring countries (in areas that used to belong to Hungary before WW1).

This is his best-known statue on Petőfi Square in downtown Budapest, made by Miklós Izsó and (after his death) Adolf Huszár in 1882.
Links: en.wikipedia.org
497 views