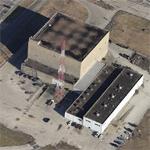 SAGE, built by IBM, was used to collect, organize, and disseminate information on the air defense environment of the continental United States for NORAD and the ADC.

The SAGE blockhouse was a four story windowless building that housed the massive computers of the day that SAGE used.
2,658 views

SAC, Tactical Air command command responsibilities were transferred to NORAD, and only the Omaha SAC base remained for some time. RGAFB was decommissioned and destroyed by bad planning by the Kansas City people who got control of the property.