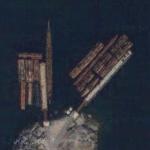 By Hinkkanen @ 2006-04-23 09:39:32
@ 69.248669, 33.234243
Sayda Guba, Russian Federation (RU)
In 1990, the inhabitants of this former fishing village were forced to vacate when Sayda Guba (Sayda Bay) became a military area for storing hulls and reactor compartments from nuclear submarines dismantled at Severodvinsk, Nerpa, and Gadzhiyevo. The bay itself is approximately 10 kilometers long and two to three kilometers wide, with a 100-meter-wide mouth. The base includes three piers, the oldest of which could sink at any time, according to experts at the base, and scarce funds prevent the construction of new piers. As of April 1995, twelve nuclear submarine hulls and twelve reactor compartments were docked at these piers. While the spent fuel has been removed from these twelve reactor compartments, one contains 20 metric tons of solid radioactive waste.
Links: www.nti.org
1,645 views