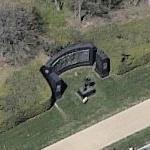 When the United States was suddenly and dramatically pulled into World War II following the Japanese attack on Pearl Harbor in December 1941, there was an acute shortage of military bases to support American combat forces deployed in Europe and the Pacific. To alleviate the shortage, the United States Navy established an engineering and construction force known as the U.S. Naval Construction Battalion, or C.B.

Soon its members were universally known by the nickname derived from those initials, the Seabees.

Along Memorial Drive near the Arlington Cemetery Metro stop is a monument dedicated to the men who have served as Seabees. A larger-than-life figure dominates the monument depicting the momentous contributions made by the Construction Battalion. The image is that of a Seabee, who in the midst of a construction project, stops to make friends with a young child.

On a semicircular bronze bass-relief, sculptor Felix de Weldon (who also sculpted of the Iwo Jima monument) depicted scenes of Seabees at work in various construction trades. Prominently displayed is the Seabees slogan "Can Do." The graphic memorial was dedicated on May 27, 1974.
Links: www.arlingtoncemetery.mil
1,268 views