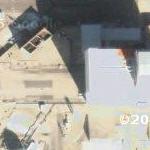 Three billion dollars down the drain. This site was built to launch the military fleet of shuttles. Inital plan was for twenty launches a year, then ten, then four, then two. It was eventually determined that maybe they could handle one a year.

There was also a lot of controversial reporting that the construction materials used were substandard.

As a June 1986 Senate report concluded: "While the Challenger accident has publicly been viewed as the reason shuttle missions cannot be performed at Vandenberg, the primary reason is the need to test and modify launch pad facilities, which, as currently built, could result in serious damage to the shuttle orbiter under certain, not improbable, circumstances."