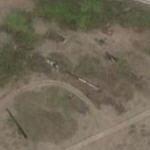 By kjfitz @ 2008-08-04 23:12:28
@ 13.077216, -59.475533
Spencers, Barbados (BB)
Project HARP, short for High Altitude Research Project, was a joint project of the United States Department of Defense and Canada's Department of National Defence created with the goal of studying ballistics of re-entry vehicles at low cost; whereas most such projects used expensive (and failure-prone) rockets, HARP used a non-rocket spacelaunch method based on a very large gun to fire the models to high altitudes and speeds.

The project was based on a flight range of the Seawell Airport in Barbados, from which shells were fired eastward toward the Atlantic Ocean. Using an old U.S. Navy 16 inch (406 mm) 50 caliber gun (20 m), later extended to 100 caliber (40 m), the team was able to fire a 180 kilogram slug at 3600 meters per second, reaching an altitude of 180 kilometers. The program was cancelled shortly after this. The politics of the Vietnam War (then in its fifth year) and soured Canada/U.S. relations played their role in the project's cancellation. The project received just over 10 million dollars during its lifetime.
Links: en.wikipedia.org, www.heronaerospace.com
3,808 views