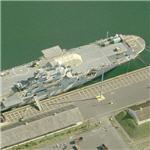 By kjfitz @ 2008-11-10 12:00:57
@ 21.352721, -157.999447
Honolulu, Hawaii (HI), US
She was decommissioned in 1995 and as of 2004, she was on loan to the Army, but remained laid up at Mare Island Naval Shipyard. In December 2006, the ship was towed to Pearl Harbor, Hawaii, where it now has a high-tech role as a launch platform with the nation's developing ballistic missile defense program. Three times the ship was towed some 100 miles off shore and used to launch small ballistic missiles, which are then intercepted by Terminal High Altitude Area Defense Missiles, test-fired from the Pacific Missile Range Facility. The last test in the series was performed October 26, when the ship fired a "scud-like" missile, which was successfully intercepted. The ship will be towed back to the San Francisco Bay Area for the winter. Kaua'i lacks a suitable land-based launch site, and the costs of building one would far exceed the approximately $600,000 per year it costs to use the old warship, so the vessel will return to Pearl Harbor for a second series of tests in late spring 2008.

The Mobile Launch Platform uses the former USS Tripoli as its launch platform. It is being utilized to provide the ability to present threat azimuth diversity for BMDS element Tests and it provides the ability to place Surface Sensors in remote ocean areas.