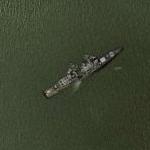 By kjfitz @ 2007-05-30 16:44:38
@ 36.976675, -76.340022
Norfolk, Virginia (VA), US
The Spruance-class destroyer was developed to replace a large number of World War II-built Allen M. Sumner- and Gearing-class destroyers, and was the primary destroyer built for the U.S. Navy during the 1970s. The class was designed for anti-submarine warfare (ASW) with point defense AAW missiles; upgrades provided anti-ship and land attack capabilities. The ships were initially controversial, especially among members of Congress who believed that their unimposing looks, with only two guns and an ASROC or ABL missile launcher per ship implied that the vessels were weak. Nonetheless, they were very successful for their intended ASW roles. Despite their "DD" designation indicating gun destroyers, their primary armament was the missiles they carried, and they should properly have been designated DDG under the US Navy's hull classification symbol system. Ironically enough, the DDG-1000 Zumwalt class destroyers are to be built around the 6.1" advanced gun system and thus properly deserving of the unmodified DD hull classification symbol.
Links: en.wikipedia.org
8,777 views