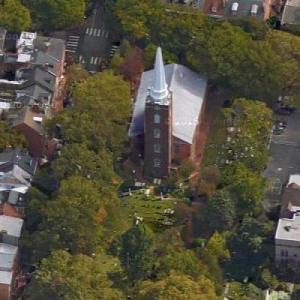 By boothy443 @ 2007-11-01 00:13:43
@ 39.94306858, -75.14771379
Philadelphia, Pennsylvania (PA), US
The Church, A National Historic Landmark, opened for worship September 4, 1761. Founded by members of Christ Church, who recently settled here and found difficult to traverse the muddy streets to the overcrowded church at 2nd and Market. Land was donated in 1757 by Proprietors (Governors) Thomas and Richard Penn, whose family crest can be seen above the pulpit. St. Peter’s was designed by Robert Smith.

Among some of the more notable figures interred in the cemetery are:
• George Mifflin Dallas, Vice President of the U.S.

• Commodore Stephen Decatur, hero of the Battle of Tripoli in 1814.

• The Chiefs of Eight Indian Tribes who were stricken with small pox while visiting Philadelphia in 1793 to meet with President Washington.

The site has be listed as one of the most haunted sites in Philadelphia
Links: en.wikipedia.org, www.stpetersphila.org
613 views