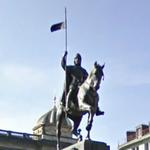 His martyrdom, and the popularity of several biographies, quickly gave rise to a cult-like following and reputation of superhuman goodness, resulting in his being elevated to Sainthood, posthumously declared king, and seen as the patron saint of the Czech state. He is even the subject of a Christmas carol written in 1853 that remains popular to this day, Good King Wenceslas.
Links: en.wikipedia.org
456 views