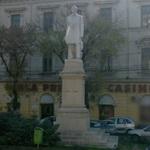 Spiru C. Haret (15 February 1851 – 17 December 1912) was a Romanian mathematician, astronomer and politician. He made a fundamental contribution to the n-body problem in celestial mechanics by proving that using a third degree approximation for the disturbing forces implies instability of the major axes of the orbits, and by introducing the concept of secular perturbations in relation to this.
Links: en.wikipedia.org
773 views