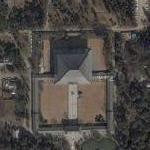 By kjfitz @ 2009-09-02 16:37:37
@ 34.689166, 135.839725
Nara, Japan (JP)
Tōdai-ji is a Buddhist temple complex located in the city of Nara, Japan. Its Great Buddha Hall , the largest wooden building in the world, houses the world's largest statue of the Buddha Vairocana, known in Japanese simply as Daibutsu. The temple also serves as the Japanese headquarters of the Kegon school of Buddhism. The temple is a listed UNESCO World Heritage Site as "Historic Monuments of Ancient Nara", together with seven other sites including temples, shrines and places in the city of Nara. Sika deer, regarded as messengers of the gods in the Shinto religion, roam the grounds freely.
Links: en.wikipedia.org, kakanow.com
671 views