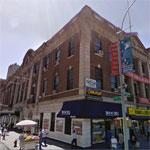 By jbottero @ 2011-01-01 16:55:25
@ 40.736532, -73.988957
New York, New York (NY), US
Tammany Hall, also known as the Society of St. Tammany, the Sons of St. Tammany, or the Columbian Order, was founded in 1786 and incorporated on May 12, 1789 as the Tammany Society. It was the Democratic Party political machine that played a major role in controlling New York City politics and helping immigrants, most notably the Irish, rise up in American politics from the 1790s to the 1960s. It controlled Democratic Party nominations and patronage in Manhattan from the mayoral victory of Fernando Wood in 1854 through the election of John P. O'Brien in 1932. Tammany Hall was permanently weakened by the election of Fiorello La Guardia on a "fusion" ticket of Republicans, reform-minded Democrats, and independents in 1934, and, despite a brief resurgence in the 1950s, it ceased to exist in the 1960s.

The Society's new building on East 17th Street and Union Square East was finished and occupied by 1929. After the Society folded in the 1960s, the building was turned over to commercial usage, and now houses the New York Film Academy and the Union Square Theatre.
Links: en.wikipedia.org
912 views