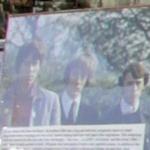 Barry Alan Crompton Gibb, CBE (born 1 September 1946) is a musician, singer and songwriter and producer, who rose to worldwide fame as a founding member of the Bee Gees. He is also the eldest and last surviving Gibb brother.

Robin Hugh Gibb, CBE (22 December 1949 – 20 May 2012) was a singer and songwriter, best known as a member of the Bee Gees, co-founded with his twin brother Maurice and older brother Barry. Their younger brother Andy was also a singer.

Maurice Ernest Gibb, CBE (22 December 1949 – 12 January 2003) was a musician, singer-songwriter and record producer. He was born in the Isle of Man to English parents, the twin brother of Robin Gibb and younger brother to Barry. He is best known as a member of the singing/songwriting trio the Bee Gees, formed with his brothers.
Links: en.wikipedia.org
927 views