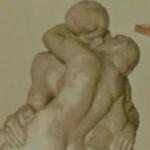 By kjfitz @ 2013-08-08 21:23:20
@ 51.507731, -0.099274
London, United Kingdom (GB)
The Kiss is an 1889 marble sculpture by the French sculptor Auguste Rodin. The embracing couple depicted in the sculpture appeared originally as part of a group of reliefs decorating Rodin's monumental bronze portal The Gates of Hell, commissioned for a planned museum of art in Paris. The couple were later removed from the Gates and replaced with another pair of lovers located on the smaller right-hand column.
Links: en.wikipedia.org
390 views