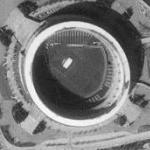 The stadium's name was derived from the junction of the Monongahela and Allegheny rivers, where they formed the Ohio River, the "Golden Triangle". The stadium was located on the north side of the confluence.

Three Rivers played home to Pittsburgh's Pirates, Steelers and the USFL Pittsburgh Maulers, as well as to concerts, monster truck rallies, professional wrestling shows, Billy Graham revivals, and other types of events. In all, Three Rivers Stadium hosted over 5,000 events in its 30 years of existence, but it was seen as an outdated facility in the "luxury box" and "signature stadium" era of the 21st century.

The stadium's design was nearly circular, attempting to facilitate use by the Pirates and Steelers with equal accommodation. Unfortunately, as was the case with other cities in which this so-called "cookie cutter" approach was employed (Washington, New York, Houston, Atlanta, St. Louis, San Diego, Cincinnati, and Philadelphia), the fundamentally different shapes of the playing fields made the stadium inadequate to the needs of either sport. Even by "cookie cutter" standards, the upper deck at 3RS was exceptionally high, making for steep climbs by event attendees and adding to its cavernous feel. By the 1990s, the use of multiple low-bid contractors in its construction began to show, as parts of the concrete began to turn differing shades of brown.

The stadium did have its moments of glory and drama, mostly in its first decade of existence. The Pirates won the 1971 and 1979 World Series while playing here, upsetting the favored Baltimore Orioles in both series. The 1971 World Series featured the first night game in World Series history (Game 4). Roberto Clemente ended his career while playing here, garnering 3,000 hits, before his death in a plane crash while bringing earthquake relief supplies. Slugger Willie Stargell established himself as a fan favorite. The Pirates also made the playoffs during 1990-1991-1992, only to be thwarted by the Cincinnati Reds and the Atlanta Braves, and since then by the competitive disproportions of the big-contract era in baseball.

The Steelers fielded what was arguably the greatest NFL team of all time, culminating in four championship trophies for the 1970's with wins in Super Bowl IX, Super Bowl X, Super Bowl XIII and Super Bowl XIV. The Steelers, coached by Chuck Noll, featured quarterback Terry Bradshaw, running back Franco Harris, receiver Lynn Swann, and defender "Mean" Joe Greene, who anchored the "Steel Curtain." The so-called "Immaculate Reception" play occurred here, in a 1972 AFC playoff game against the Oakland Raiders. In the 1990's the Steelers, coached by Bill Cowher, again made the Super Bowl (Super Bowl XXX), only to lose to the Dallas Cowboys. One of the biggest upsets in NFL history occurred on January 15, 1995, when the San Diego Chargers scored a last-second goal line stand and upset the Steelers in the AFC championship game, 17-13, negating a stellar performance by quarterback Neil O'Donnell.

For the 2000 football season, Three Rivers Stadium was the interim home for the University of Pittsburgh varsity football team. During that season, the stadium played host to the last game of the longtime Pitt-Penn State rivalry, which Pitt won, 12-0.

Three Rivers Stadium was imploded on February 11, 2001. The Pirates moved into a baseball-specific facility, PNC Park, situated farther east on the north bank of the Allegheny River. The Steelers later that year moved into Heinz Field, a facility built less than 50 feet (15 m) from where Three Rivers stood.
Links: www.3riversstadium.com, en.wikipedia.org
4,786 views