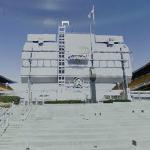 By Matheus_ @ 2011-12-31 11:20:28
@ 40.445357, -80.015023
Pittsburgh, Pennsylvania (PA), US
Heinz Field is a stadium located at Exit 2B of Interstate 279 and the terminus of "Expressway" 65 on the North Shore of Pittsburgh, Pennsylvania. It primarily serves as the home to the Pittsburgh Steelers and University of Pittsburgh Panthers American football teams, members of the National Football League (NFL) and National Collegiate Athletic Association (NCAA) respectively. It hosted the 2011 NHL Winter Classic between the Pittsburgh Penguins and Washington Capitals on January 1st 2011. The stadium opened in 2001, after the controlled implosion of the teams' previous stadium, Three Rivers Stadium. The stadium is named for locally based H. J. Heinz Company, which purchased the naming rights in 2001.
Links: en.wikipedia.org
784 views