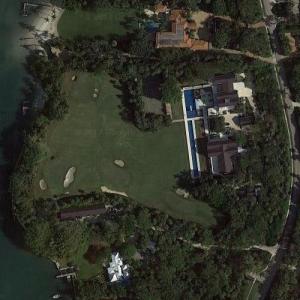 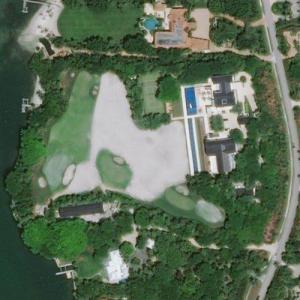 By Parabellum @ 2006-01-07 15:17:59
@ 26.99849439, -80.09070079
Jupiter Island, Florida (FL), US
Tiger Woods' house is located on Jupiter Island in Florida. Jupiter Island is an exclusive Florida community, having the second highest per-capita income of any inhabited place in the country, with just 817 residents. Jupiter Island is also home to other professional golfers such as Gary Player, Nick Price, Luke Donald and Jack Nicklaus.

Tiger Woods' mansion is set on a 12-acre property, boasting 10,000 square feet of living space. The oceanfront property was purchased for $40 million in 2006. After purchasing the property, Tiger demolished the existing (just 13 year old) mansion and spent another $20 million building his new dream home. He moved into his new bachelor pad in 2011 after getting a divorce from his ex-wife, Elin Nordegren.

The mansion is reportedly worth $55-60 million. Not much is known about the interior's amenities, but what you can see from satellite views is pretty spectacular: A 3.5 acre golf course complete with four greens, a wedge range and other turfs for practice. There is a tennis / basketball court, and two large pools (a 100 foot lap pool and a 60 foot diving pool).

At the edge of his property, overlooking the Atlantic Ocean is a boat dock for his 155 foot yacht, named "Privacy".

Unfortunately for Tiger and his new girlfriend Lindsey Vonn, the grounds are reportedly sinking due to the soft Florida soil, causing cracks in the walls. A contractor was hired to help stabilize the structures, by using "helical piles" as support beams.

Tiger Woods' net worth is over $500 million, with career earnings of over $1.3 billion. He is one of the greatest golfers of all times, having over 70 PGA victories at 14 majors including four PGA Championships and Masters each. Tiger is also one of the most charitable sports figures, having donated $3 million of his own money victims of the 2010 earthquake in Haiti. While Tiger has won a hefty sum (nearly $100 million) from his PGA victories, most of Tiger's fortunes have come from lucrative endorsement contracts (notably Nike, Titleist and Gatorade).