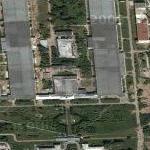 As is the tradition with Soviet towns containing secret facilities (Ozersk aka Chelyabinsk-40, Zheleznogorsk aka Atomgrad aka Krasnoyarsk-26, Sarov aka Arzamas-16), the name is actually a P.O. Box number and implies that the place is located some distance from the city of Tomsk (15 km to the NW, in fact).

Seversk is the site of Siberian Chemical Combine (Sibkhimkombinat), founded in 1954. It is comprised of several nuclear reactors and chemical plants for separation, enrichment and reprocessing of uranium and plutonium. Nuclear warheads were being produced and stored on the premises.

One of the most serious nuclear accidents at SCC occurred on April 6, 1993, when a tank containing a highly radioactive solution exploded.

The Siberian Chemical Combine (SKhK), located in Seversk (formerly known as Tomsk-7), is one of the principal nuclear materials production sites in the MINATOM complex, with uranium processing facilities, production reactors, a spent fuel reprocessing plant, a uranium enrichment plant, and a variety of other processing and storage facilities. Tomsk-7 was established in 1949 to produce and process fissile materials for the nuclear weapons program. The Siberian Chemical Combine (originally the Combine 816) is Russia’s largest plutonium production and fissile material management complex.
Links: www.pbs.org
1,504 views

Anonymous
@ 2005-12-08 09:28:21
This cannot be Krasnoyarsk-45 (Zelenogorsk), which is situated approximately 120 miles east of Krasnoyarsk. Some map searching shows that it is merely some northern suburb of the quiet siberian city of Tomsk. Nice try, though !

kjfitz
@ 2005-12-08 10:16:07
Well you are half right. It isn't Krasnoyarsk-45. But it isn't merely some northern subsurb of Tomsk eithr. It is Seversk, home of The Siberian Chemical Combine (Sibkhimkombinat) which consists of five military production reactors, a chemical separation plant, a reprocessing facility for uranium and plutonium, a uranium enrichment plant, and storage facilities for radioactive waste. There is also a facility to store retired warheads.

Thanks for pointing it out.