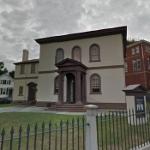 By jbottero @ 2013-11-18 16:24:28
@ 41.489374, -71.312223
Newport, Rhode Island (RI), US
Among the many historic colonial buildings in Rhode Island is Touro Synagogue, the oldest synagogue in America. It still serves an active congregation. Founded in 1763, this little synagogue's history is representative of the religious tolerance that has always characterized Rhode Island. It is also an architectural gem, designed by America's greatest 18th-century architect.

Newport's Jewish congregation was formed in the spring of 1658, when a party of 15 Jewish families arrived from the Caribbean, possibly Barbados or Curacao. They were fleeing religious persecution, just as their ancestors had done from Spain and Portugal.

They received a warm welcome in religiously tolerant Newport. And a few years later (1663), the royal charter of Rhode Island formalized the established local practice that everyone has "full liberty in religious concernments." Newport's Jews thrived in the trade business and for over a century held services and ceremonies in each other's homes.

Finally, in 1759, the growing community built a synagogue. They named it after Isaac Touro, a prominent member of the congregation. The building was designed by Peter Harrison (1716-75), who is regarded by many as the finest architect in 18th-century America - he also designed King's Chapel in Boston and Christ Church in Cambridge, Mass.

Harrison was an Anglican and had never seen a synagogue in his life, so the congregation showed him sketches of the Portuguese Synagogue in Amsterdam. The new synagogue was dedicated on the first night of Hanukkah in December 1763.
Links: en.wikipedia.org
515 views