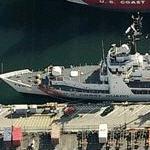 By kjfitz @ 2006-03-07 13:33:31
@ 47.590701, -122.340218
Seattle, Washington (WA), US
USCGC MIDGETT is the twelfth and last of the Coast Guard's fleet of 378 foot High Endurance Cutters. She is the third in her class (HERO) to be named for outstanding Coast Guardsmen. Her namesake, the late Chief Boatswain John Allen MIDGETT, Jr. was born in 1876 in Rodanthe, North Carolina and served for nearly forty years with the U.S. Lifesaving Service and the Coast Guard. He was awarded the Gold Lifesaving Medal for his heroic rescue of 36 crewmen from the torpedoed British tanker MIRLO in 1918. Bos'n Midgett and his lifeboat crew rescued the entire crew, despite rough seas and flames from the tankers cargo of refined oil and gasoline. J.A. Midgett, Jr. was also one of seven of Midgett family members to have been awarded the nations highest award for saving a life - the Gold Lifesaving Medal. More than 150 living members of the Midgett family have made the Coast Guard a career, including more than thirty still on active duty.

Coast Guard Cutter Midgett keel was laid 05 April 1971 at the Avondale Shipyards in New Orleans, Louisiana and she was launched on 04 September 1971. She was then commissioned on 17 March 1972. She was decommissioned and placed in Fleet Renovation and Maintenance (FRAM) on 07 January 1991 and was placed in "In Commission Special" status as of 25 April 1992. MIDGETT was fully re-commissioned in February 1993. She is a multipurpose ship, designed to meet the many and varied missions of today's Coast Guard. Her responsibilities include Homeland Security, Search and Rescue, Maritime Law Enforcement, and Alien Migrant Interdiction Operations as well as maintaining military readiness in support of our NATO allies and the U.S. Navy. One of ten high endurance cutters on the west coast, her normal patrol areas include the Bering Sea, Gulf of Alaska and Central American waters, enforcing the Magnuson Fishery Conservation and Management Act (200 mile limit) and drug interdiction laws. MIDGETT, with a crew of 24 officers and 160 enlisted men and women, is homeported in Seattle, WA and is under the operational and administrative control of Commander, Pacific Area (COMPACAREA).