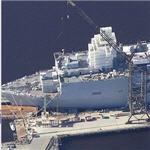 By kjfitz @ 2006-04-01 19:59:11
@ 36.833029, -76.293391
Norfolk, Virginia (VA), US
USS ASHLAND (LSD 48) is an amphibious warfare ship designed to transport Marines and their combat gear throughout the world and then to launch and support assault landing craft and helicopters during amphibious operations against hostile shores. ASHLAND carries Landing Craft Air Cushion vehicles (LCACs), as well as other convential landing craft. LCACs are non-displacement assault landing craft. Coupled with the ability to land a number of naval helicopters, ASHLAND is extremely capable in spearheading an amphibious assault against a wide range of beaches which, before were not operationally feasible.

Officially designated as a Landing Ship, Dock (LSD), ASHLAND accomplishes her mission throughout he use of a well deck which is flooded to recover and launch landing craft. After leaving the ship, the assault craft are directed towards the objective by the ship's Combat Information Center (CIC). A 440-ft well deck, a flight deck able to land and launch CH-53E helicopters, the Navy's latest diesel propulsion and engineering technology, advanced communication and combat systems, 20- and 60-ton cranes, expanded repair facilities, complete medical and dental facilities, and troop berthing accommodations for embarked Marines combine to place ASHLAND on the leading edge of amphibious warfare in the 21st century.

USS ASHLAND (LSD 48) is the eighth and last of the WHIDBEY ISLAND (LSD 41) class ships to be commissioned and the second U.S. Navy ship to bear that name. The first was USS ASHLAND LSD-1 and was commissioned June 22 1942.