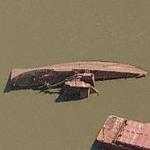 In August 1993, during flooding of the Mississippi River, Inaugural broke loose from its moorings at the Gateway Arch. The ship suffered a breach in its hull, took on water, and rolled on its side.
Links: en.wikipedia.org
5,982 views