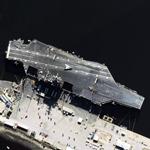 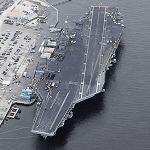 Kennedy was decommissioned on March 23, 2007 at Mayport, FL, 18 months short of 40 years service in the United States Navy, leaving the USS Kitty Hawk (CV-63) as the only conventionally-powered carrier left in the Navy. The Kennedy's last skipper, Captain Todd Zecchin, has been dispatched to Japan to oversee the decommissioning of that ship as well.
Links: en.wikipedia.org, www.strategypage.com
3,711 views