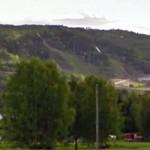 The hill was built in 1936 and was rebuilt to a ski flying hill in 1966, when Bjørn Wirkola set a new world record, jumping 146 meters. The hill has been rebuilt and renovated many times, the last time before the 2000 Ski-flying World Championships. The hill is owned by "Stiftelsen Vikersund Hoppsenter", a foundation created by Vikersund IF.

14 - 15 march 2009 World Cup Skiflying and Nordic Combined will be organised in Vikersund.

In 2011 World Cup Skiflying will take place in Vikersund. The skiflying event this year are trial World Championships.