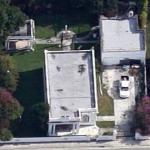 Former owners and area residents say that cats have been killed when mysteriously slammed shut in the front iron gate, and there have been reports of smelling fresh roses and Cuban coffee in the home. During a seance performed in the 1970s, a spirit allegedly told the group that she likes to put vases of roses out.
Links: ghost.hauntedhouses.com
812 views