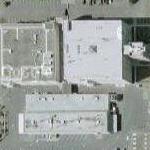 By kjfitz @ 2005-08-03 11:09:31
@ 47.121841, -122.504382
Tacoma, Washington (WA), US
Manned by personnel from ACC and the Canadian Forces, this bi-national organization exercises operational control of Air National Guard fighter aircraft on continuous alert at
four coastal locations and uses radar data and the radio capabilities of Joint Surveillance System sites located throughout the western United States. These sites, jointly funded and used by the Department of Defense and the Federal Aviation Administration are operated and maintained by FAA personnel. Radar data is electronically fed into computers at the Sector Operations Control Center where personnel correlate and identify all airborne targets and, if necessary, scramble alert fighters to identify those whose origin is
unknown. In wartime, these same procedures are used to intercept and, if required, destroy enemy aircraft.

(I'm not 100% certain that this is the building but it matches the style i.e. size/shape of the building and the HF antenna outside to the SW is the same as other command centers with SAC and FEMA.)
Links: microvoltradio.com
1,196 views

jbottero
@ 2006-10-16 21:33:36
WADS is actually just the part of the building on the left. The part on the right houses the Com Squadron, the library, the education center, and some civilian personnel functions.