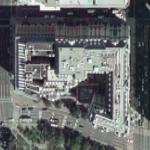 The new Willard, designed by New York architect Henry Janeway Hardenbergh and erected by the George A. Fuller Company, was hailed at its opening as Washington's first skyscraper. Completed in 1904, the new building saw an addition of 100 rooms in 1925, broadening the F Street facade by about 49 feet. The property remained in the Willard family until 1946, closed in 1968, and underwent extensive renovation, again opening its doors in 1986.