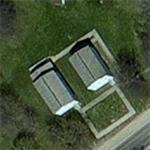 The two buildings seen here are the Council House (right), where the meetings took place, and a lodging house (left). After the meetings, both buildings were used as residences before eventually being converted to livestock barns.

In 1924, the Council House was restored to its original state. The lodging house was restored in 1956. This site is owned and operated by the Wisconsin Historical Society. Visitors can tour the site for free.