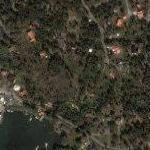 The Ytterby Mine in Sweden, the derivation of the names of four of the rare earth elements (yttrium, ytterbium, terbium,
and erbium), is famous for its mineralogical treasures.

The minerals for which the Ytterby Mine became famous are gadolinite, (Y,RE)2FeBeSi2O10 (RE = rare earth element), and yttrotantalite, YTaO4.

The Ytterby Mine was a source of feldspar and quartz for the porcelain trade in Great Britain and Poland. The mine opened
in the 1750s and was closed in 1933.

Ytterby, a village in Sweden on the island of Resarö, close to Vaxholm (east of Stockholm) is a deposit of many unusual minerals, containing rare earth and other elements. At the Vaxholm Fästnings Museum (in the Vaxholm citadel) there is a minute exhibition about the Ytterby mine, known for Ytterbium, Yttrium, Terbium, Holmium, Scandium, Gadolinium and Lanthanum. In 1989 the mine was voted the "Historical Landmark of the year" by the American Society of Metals, which annually awards a place, building etc. having a historical significance within the metal or metalworking industry. A plaque from the ASM can be found at the entrance to the mine.

Quartz was quarried in this mine in the 1500's for ironworks in north Uppland. The quarrying of feldspar for the porcelain and glass industry started at the end of the 1700's and continued until 1933, when the mine was shut down.

The name Ytterby is composed from ytter = outer, and by = village, and means 'outer village', probably since it is located on the outermost point of the island of Resarö.
2,168 views