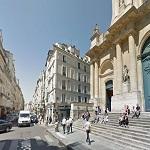 By tallturtle82 @ 2016-03-03 11:15:25
@ 48.8648272, 2.3321516
Paris, France (FR)
The 13 Vendémiaire was a battle between the French Revolutionary troops and Royalist forces on October 5, 1795. Young Napoléon Bonaparte arrived and held off the Royalists despite being outnumbered six to one. Napoleon held off the mob by firing grapeshot from his cannons, driving the Royalists back and extinguishing the threat.

Although some believe Napoleon himself uttered a "whiff of grapeshot", It was more likely Scottish philosopher and historian Thomas Carlyle.
Links: en.wikipedia.org
1,070 views