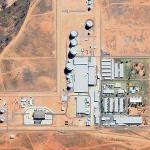 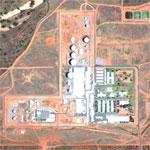 The Australian goverment wants Google Maps to remove this image and this image from their database.

Pine Gap, near Alice Springs, employs nearly 1,000 people, mainly from the Central Intelligence Agency and the National Reconnaissance Office. Originally code-named MERINO, it is the ground station for a satellite network that intercepts telephone, radio, data links, and other communications around the world. The facility currently includes a dozen radomes, a 5,600 square meter computer room, and 20-odd service and support buildings. Two of its ground antenna are part of the U.S. Defense Satellite Communications System.

In 1988 a new 10-year lease for the US facilities was signed by then Prime Minister Bob Hawke. The agreement specified a three-year notification period which required the Australian government to give notice in 1995 to close both Nurrungar and Pine Gap in 1998, when the leases come up for renewal. Australia arranged to have greater access to the information collected by the bases.

When Nurrungar closed in 2000, some Nurrungar hardware and personnel was moved to Pine Gap.