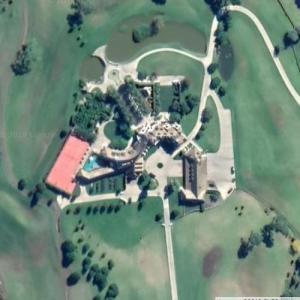 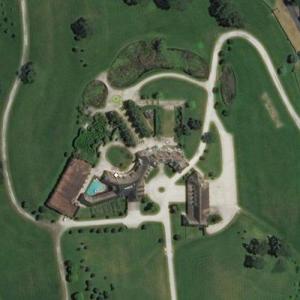 By Turneasterne @ 2012-01-19 22:57:31
@ -36.7270648, 174.66126883
Coatesville, New Zealand (NZ)
This is the Coatesville, New Zealand mansion of Kim Dotcom (Kim Schmitz or Kim Tim Jim Vestor), the founder and "chief innovation officer" of MegaUpload. He is a computer hacker turned online file-sharing tycoon at the centre of an FBI-led crackdown on online piracy that has spread to New Zealand. He is a a resident of both Hong Kong and New Zealand, and a dual citizen of Finland and German. Prior to becoming an entrepreneur, Schmitz gained notoriety as a computer criminal who was convicted of credit card fraud, hacking, insider trading, and embezzlement.

New Zealand's most expensive home the $30 million "Chrisco" mansion is understood to have finally sold. Nearly two years after owners Richard and Ruth Bradley founders of the Chrisco Christmas hamper empire moved to Sydney, the 24.3ha estate has been taken over by a Finnish man in a long-term lease deal. The mansion was completed in 2006, and features six bedrooms, a tennis court, a lap pool, and a large tropical fish tank. A barn and garage area sits next to the main house, overlooking a roll of hills, palm trees and a garden maze. The grounds also feature life-size sculptures of a mother and baby giraffe and a realistic rhinoceros.

A computer hacker turned online file-sharing tycoon is the man at the centre of an FBI-led crackdown on online piracy that has spread to New Zealand. Kim Dotcom (also known as Kim Schmitz) is a 39-year-old German who also holds Finnish citizenship, and has Hong Kong and New Zealand residency. He lives in New Zealand's most expensive house - the $30 million former Chrisco mansion in Coatesville, north of Auckland - which was raided by police on Friday morning as they executed search warrants as part of a probe into the Schmitz-founded file-sharing website
Megaupload.com, a file-sharing website, was shut down as part of an alleged $175 million copyright infringement conspiracy, triggering an online protest that disrupted websites of the U.S. Justice Department and movie and music trade groups. Charges against seven individuals, Megaupload Ltd. and Vestor Ltd. were unsealed yesterday in federal court in Alexandria, Virginia, after four of the alleged conspirators were arrested in Auckland, New Zealand. Three suspects remain at large, according to the Justice Department. Two corporations – Megaupload Limited and Vestor Limited – were indicted by a grand jury in the Eastern District of Virginia on January 5th, 2012, and charged with “engaging in a racketeering conspiracy, conspiring to commit copyright infringement, conspiring to commit money laundering and two substantive counts of criminal copyright infringement.” On January 19, 2012, the authorities executed in excess of 20 search warrants in the United States and eight other countries. This is where one of those took place.

Prosecutors said the conspiracy was led by Kim Dotcom, a 37-year-old resident of Hong Kong and New Zealand, and a dual citizen of Finland and Germany, who had legally changed his last name. Dotcom founded Megaupload Ltd. and is the director and sole shareholder of Vestor Ltd., according to the indictment.

In 2010, Dotcom received more than $42 million from the conspiracy, the indictment alleges. Dotcom, who also goes by Kim Schmitz and Kim Tim Jim Vestor, was one of those arrested. In 2002, Dotcom, then using the name Schmitz, was deported from Thailand to Germany to face insider trading and fraud charges. He was a hacker who cracked the computer systems of banks and government organizations including those of Citibank Ltd. and the U.S. Pentagon, then fled to Thailand to avoid indictment in Germany, Deutsche Presse Agentur reported. The other three taken into custody were: Finn Batato, a German resident and chief marketing officer, Mathias Ortmann, co-founder and director, and Bram van der Kolk, who oversees programming of the Megaupload websites. Julius Bencko, a resident of Slovakia and graphic designer, Sven Echternach, a resident of Germany and head of business development, and Andrus Nomm, a citizen of Estonia and head of software development, were also charged. Assets belonging to the founders including a Rolls Royce Phantom Drophead Coupe among luxury cars.