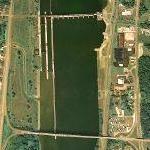 Hundreds of barges were backed up in both directions on the Ohio River Thursday after the gates on a set of locks failed.

Traffic on the Ohio River was halted after the primary lock chamber at the Hannibal Locks and Dam near New Martinsville, W.Va., was placed out of service due to the failure of a seal on the lock gates.

The auxiliary chamber was previously closed Oct. 22 for a 20-day scheduled maintenance, so both chambers at the locks are currently closed to river traffic.
Links: www.lrp.usace.army.mil
1,057 views