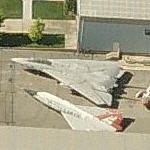 Today I visited the Yanks Museum in Chino so I could take some pics for this group. When we arrived there were Immigration and Customs Enforcement people all over. I asked one who looked like he was in charge what was happening and he said, "We're just looking at some planes." I asked the volunteers and they didn't know.

We walked around the building and there were people crawling all over an F-14. They had just removed a panel behind the cockpit (ejection seat mechanisms?) and one guy yelled down "It all been blown out" or something like that.

One man with a gun and a badge was taking pictures of everything that was happening, the airplane ID markings, etc. I asked him what they were looking for and he said, "I'm not at liberty to say."

Here is a picture of the men working on the plane. The man to the far left is the guy with gun, badge, and camera.

By this time there were guys at the F-14, three out in the parking lot, another in the restoration building and others going in and out the Museum doors.

We eventually left. As we pulled out a large flat bed 18 wheeler had obviously gotten lost and was backing up. As it finally pulled forward again we saw a large white and blue box on it that looked like a portable office.

We drove down to the Planes of Fame Museum at the other end of the airport and as we walked in two more ICE guys were leaving. I asked the girl at the register what hey were doing there and she said they were wanting to see their F-15 [sic] and that they were probably going to take it with them. She didn't know why.

After we left there we drove further past the airport to the main gate to the flight line. I parked off to the side to take a picture of some stuff out on the flight line and as I was taking the picture through the chain link fence two SUVs pulled up behind me, a guy in an ICE shirt got out and asked me "who I was with." I said I was just passing through and he said OK and walked away. I watched him drive out to where an F-14 was now parked on the flight line along with and SUV with "Command Post" written on it and the formerly mentioned blue and white portable office.

Later this evening on arriving at home I Googled Chino and see that the ICE has seized Four F-14 Jets Seized From Private Owners with a photo of the Command Post and the blue and white trailer.