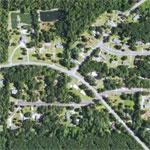 Witnesses said the planes were flying in formation during the show at the Marine Corps Air Station and one dropped below the trees and apparently crashed, sending up clouds of smoke.