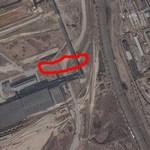 By DonMartini @ 2007-11-02 05:24:56
@ 59.388086, 56.771507
Berezniki, Russian Federation (RU)
While neither news nor technology, click on the above link to look at some incredible photos of the Berezniki Sinkhole. This sinkhole first opened up in 1986 as a result of flooding in a Russian potash mine. Several papers have been written on the causes of the sinkhole. The size of the collapse is approximately 80m long, 40m wide and 200m deep!

The sinkhole is expanding and is expected to swallow up the only rail line that leads to and from the potash mine. This area produces about 10% of the worlds potash which is used in fertilizer. World wide demand will most likely be shifted to a Canadian Producer whose stock is soaring with the news of this sinkhole.
Links: dp.g.doubleclick.net
6,093 views