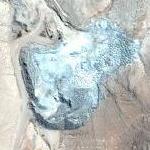 The San José Mine is about 45 kilometers (28 mi) north of Copiapó, Chile. The miners were trapped at approximately 700 metres (2,300 ft) deep and about 5 kilometers (3.1 mi) from the mine entrance. The mine had a history of instability that had led to previous accidents, including one death.[3] A government report from July 2010 warned that the mine owners had failed "to reinforce the roof ...". The lack of reinforcement "had led to [an earlier] collapse of the roof." There has been controversy over why the mine was not closed down earlier.
Links: en.wikipedia.org
1,472 views